Skip to main content
Submitted by Martina Antonucci on November 10, 2016 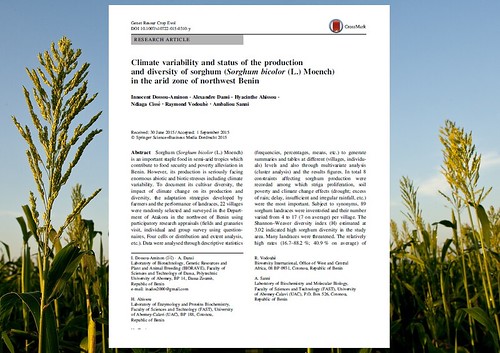 The contribution of sorghum to food security in drylands cannot be overlooked – it is well-adapted to grow in both arid and semi-arid environments, and represents the main food grain for over 500 million people living in 30 countries.

In Benin, sorghum is the second most produced cereal. Not only does the importance of sorghum lie in its use as a subsistence food crop; it is also valued for its economic benefits and age-old cultural significance.

As is the case in many countries, climate variability undermines sorghum productivity in Benin; putting the food security and economic growth of rural communities at risk. The CGIAR Research Program on Dryland Systems worked on developing strategies that help smallholder farmers adapt to climate change, and allow rural communities to realize their economic and agricultural potential despite climatic stressors.

The recent article “Climate variability and status of the production of diversity of Sorghum (Sorghum bicolor (L.) Moench) in the arid zone of northwest Benin” offers a detailed analysis of the current state of sorghum production in Benin, and provides valuable knowledge for future development interventions.

The authors used a Participatory Research Approach to collected data from 22 villages in the Department of Atakora, the second sorghum production zone in Benin. Data about the constraints of sorghum production, impacts of climate change, diversity of sorghum landraces and alternative farmer preferences was collected. Here, we present the key findings.

In the study area, sorghum is cultivated under rain-fed conditions. The annual production of sorghum is about 27.700 million kg, however, this varies significantly from year to year. Farmers reported that the major constraints to sorghum production were climate change impacts, such as:

Other reasons for lower production were the proliferation of the parasitic weed Striga, insufficiency of performing landraces, the competition for land with maize and the difficulty of postharvest storage.

2. Impacts of climate change on sorghum production and mitigation strategies

Depending on the problem, different strategies were developed with farmers to mitigate the impacts of climate change. For example, the use of early-maturing varieties and shifting to wetlands are the most used strategies in response to drought. On the other hand, to overcome constraints due to soil poverty, crop rotation and fallow practices were used.

The adoption of performing varieties is currently not a common strategy to adapt to climate change impacts, suggesting an opportunity for future development interventions:

Because sorghum has long been neglected by scientific research in Benin, farmers’ access to performing local or improved varieties is very limited. Developing types of landrace with high degrees of heterozygosity and genetic heterogeneity for adaptation traits helps achieving better individual and population buffering capacity.”

3. Diversity of sorghum at community and household levels

A high diversity sorghum crops was found in the studied zone: subject to synonyms, 89 local names of sorghum landraces were inventoried and the number of landraces per village ranged from 4 to 17 (7 on average).

Nevertheless, relatively high rates of loss of cultivars were also recorded. On average, 4 landraces were abandoned per village. The study revealed that while some abandoned landraces in certain villages are still cultivated, others have completely disappeared. This data calls for conservation strategies that need to be developed to reverse the genetic erosion recorded in the studied area.

The main criteria used by farmers when deciding whether to abandon a specific landrace was mostly related to susceptibility to climate change effects. Other factors that influenced the farmers’ decision making process included:

Participatory evaluation of the existing landraces led to the identification of high-performing varieties that are resistant/tolerant to diverse abiotic and biotic stresses. These varieties can be used as good genetic basis for varietal improvement. In fact, strengthening the genetic diversity will enhance the adaptation of sorghum to climate variability and to other production constraints.

The authors report that no modern or formal sorghum seed production system exists in Benin. Seeds are mainly obtained by retention from previous harvest and are conserved dried.

The study provides valuable knowledge to improve sorghum production in Benin. Climate change seriously affects crop yield, posing risks to the economy and food security of the region. However, the wide indigenous knowledge on sorghum production and the genetic diversity present in the region represents an opportunity to develop strategies to better cope with climate variability.

The authors highly recommend reversing the genetic erosion. Sorghum germplasm should be collected for both ex situ conservation and utilization purposes. Sorghum improvement programs can be carried out with a participatory approach that consider farmer preferences with regards to sorghum landraces and their knowledge of sorghum cultivation. In this way, more performing varieties and agricultural practices that correspond to the needs of rural communities can be introduced, sustaining economic development and ensuring food security of the country.

The study reviewed in this blog was conducted under the framework of the CGIAR Research Program on Dryland Systems. The study was authored by I. Dossou-Aminon, A. Dansi, H. Ahissou, N. Cisse, R. Vodouhe and A. Sanni.

Martina Antonucci is the Science Communications and Knowledge Management intern at the CGIAR Research Program on Dryland Systems.