Skip to main content
Submitted by Martina Antonucci on October 31, 2016 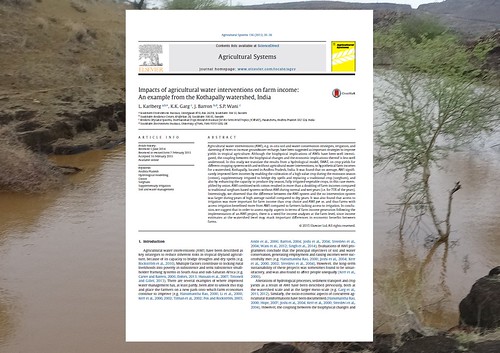 The increase in frequency of droughts and dry spells significantly constrains agricultural production and the development of rural communities in South Asia and sub-Saharan Africa. Through the promotion of sustainable agricultural practices, the CGIAR Research Program on Dryland Systems aims to alleviate food insecurity and poverty in these regions.

Agricultural water interventions (AWIs) range from in-situ soil and water conservation strategies to full irrigation systems. They represent an opportunity to protect agricultural production from climate variability and to improve the livelihoods of smallholder farmers in poor rural areas.  The recently published article “Impacts of agricultural water interventions on farm income: An example from Kothapally watershed, India” analyzes the potential of AWIs to improve farm incomes using a watershed in Andhra Pradesh as an example.

In the studied area, a wide range of water harvesting and rainwater infiltration enhancing technologies were implemented in order to decrease water runoff and prevent soil loss. Consequently, the groundwater table increased, and hence, irrigation was enhanced. Thanks to the availability of irrigation water, the traditional cropping system based on sorghum was replaced by cotton. As a high value crop, cotton is expected to be more profitable for farmers than sorghum. The goal of the study is to investigate whether the AWIs and the agricultural practices adopted thanks to them, truly benefit farmers in terms of income.

For this study, Soil Water Assessment Tool (SWAT) was used to investigate the hydrological impacts of different agricultural water interventions on crop growth. Farm incomes were calculated from crop yields, and different case studies of soil and water management practices and cropping systems were analyzed. These include:

The results suggest that AWIs generally improve farm incomes. In wet and normal years AWIs enable the cultivation of cotton, which is a higher value crop than sorghum and brings more income to farmers. In dry season, AWIs increase the production of fully irrigated vegetable crops like onion. Farmers growing cotton and adopting AWIs recorded a two-fold increase in their income, as compared to traditional sorghum-based cropping systems.

Nevertheless, the difference between the income generated when AWI systems were used, and when no intervention systems were used, was surprisingly larger during wet years compared to dry years. However, traditional sorghum-based crop systems without AWIs generated more stable incomes on most farms for all years compared to cotton systems with AWIs. In the latter, more heterogeneity was found in terms of income generation within the watershed, as the difference between farms with higher and lower incomes was significant, in particular during dry years.

The results of this study highlight the need to revisit the success of AWIs in rural development and to assess their outcomes once more. In particular, equity aspects in terms of farm income generation resulting from AWIs must be explored before out-scaling AWI technologies. Income analysis must be performed, not only at the watershed level, but also at the farm level. This will allow for better identification of possible differences in economic benefits between farms.

The study reviewed in this blog was conducted under the framework of the CGIAR Research Program on Dryland Systems. The study was authored L.Karlberg, K.K. Garg, J. Barron, and S.P. Wani.

Martina Antonucci is the Science Communications and Knowledge Management intern at the CGIAR Research Program on Dryland Systems.