In Central Asia, many smallholder farmers are challenged by very hot summers, very cold winters and very water-scare environments. Climate change-related droughts and outbreaks of crop diseases, such as yellow rust, are adding to their burden. Expanding current cropping rotations and encouraging adoption of improved wheat and bean varieties are emerging as pathways toward intensification of agricultural production.

Farmers in the Fergana Valley in Uzbekistan have traditionally grown cotton and winter wheat in a twoyear crop rotation, which allows one fallow summer followed by winter. However, both crops require a lot of nutrients to attain high yields, which either renders soil impoverished, requires use of fertilizer, or both. The practice also relies on access to water for irrigation, which is becoming scarcer due to frequent droughts.

Therefore, new crop varieties better fit for local conditions could help farmers adjust to the impacts of climate change. Cultivating one heat- and drought-tolerant mungbean crop during the previously fallow summer period is proving to be one way to increase farmers’ yields and incomes. The success of the summer crop, however, depends on the adoption of high-yield, fast-maturing wheat varieties for the winter season.

In June 2014, soon after the harvest of the winter wheat crop, scientists began working with a group of local farmers to pilot new early-maturing varieties of winter wheat and of mungbean.

They expected that including mungbean in the existing wheat-cotton crop rotation would both increase cropping intensity by 50 percent, leading to higher incomes, and improve soil health through nitrogen fixation, thus reducing the cost of fertilizer application.

Scientists introduced four new mungbean varieties (Durdona, Zilola, Marjon and Turon) as well as one recently released high yielding, high quality and yellow rust-resistant winter wheat variety (Yaksart). Because this winter wheat variety matures faster and can be harvested sooner than traditional ones, it leaves enough time to grow a mungbean crop during the summer.

To ensure that seeds of these improved varieties would be available in the future, scientists trained a total of 35 wheat seed producers (33 men and 2 women) and 31 mungbean producers (22 men and 9 women) on quality seed production, storage and certification. Seed multiplication of mungbean was accomplished on 1.1 hectare during the 2014 summer and on 8 hectares during the 2015 summer. For wheat, seed production was carried out on 84 hectares between October 2014 and June 2015.

As a result of including mungbean in the cropping rotation, the seven farmers participating in the pilot earned an additional net profit of at least US$1,000 per hectare in 2014.

In addition to boosted incomes, families were also able to add nutritious mungbean grains to their diets due to higher production on their farm. Soil health was also improved as the concentration of soil nutrients and microorganisms increased after the cultivation of mungbean. 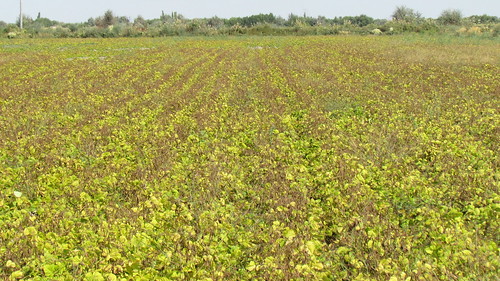 Following the success of the pilot, more than 200 farmers are expected to take up the mungbean-winter wheat crop rotation practice on more than 400 hectares in 2016. In 2017, the practice is planned to be taken up for commercial cultivation on 4,200 hectares by more than 1,000 farmers.

The production of seeds of the newly introduced mungbean and winter wheat varieties has been taken up by the district and regional administration. Policy makers are planning to bring out guidelines of mungbean seed production in 2017.

Policy makers allocated additional farmland for wheat-mungbean annual crop rotation to scale up the practice to other parts of Uzbekistan. This is the first time a new practice of winter wheat and mungbean crop rotation was organized at the state level, and the new practice was welcomed by farmers from other regions.

This activity was led by International Center for Agricultural Research in Dry Areas under the CGIAR Research Program on Dryland Systems and in partnership with the World Vegetable Center. This research was supported by CGIAR Fund Donors and by the Russian Government.

Marianne Gadeberg is a freelance writer, editor, and communications specialist.